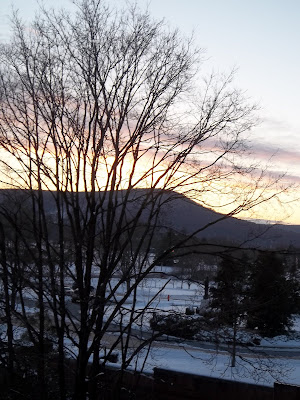 I've been asked to give three different talks in February, March, and April. I gave the first one this past Friday at the Survivors' Reception at the Relay for Life, which was held at the university where I teach. Relay for Life is a wonderful event held by communities all over the nation and all through the year; it's a fundraiser for Cancer research. Our students raised about $39,000 this year. Last Friday their efforts culminated in an event which involved about 200 students walking around the indoor track in our Field House from 7PM to 7AM... in relays, with lots of other activities going on at the same time. I walked with about 30 other survivors, and then spoke at their reception.
That talk wasn't too difficult to compose. I told my cancer story, which I have told in this blog back in 2009. I tailored it to them. Here are a few excerpts:

...Talking to survivors, you know and I know that cancer is not pretty. Much of the details of what cancer does to the body, and what the treatment for cancer does to the body, involves messy details. But when you are going through cancer treatment, you live with those realities every day...
...Procrastination didn’t kill me. By the time I went to the doctor and was diagnosed, the cancer had spread, so they couldn’t operate. However, I was very fortunate that the cancer had not spread to the lymph nodes. So I began the journey through cancer treatment that all of you have been through. The details are different for each of us, because we had different kinds and stages of cancer, requiring different kinds of treatment. But in many ways, the experience is the same.
My cancer doctors prescribed a treatment plan in which radiation was the main weapon. I had chemo, too, but the radiation was the main weapon...
...You all know that the main side effect of all radiation is fatigue. I had that, but also the radiation gave me such out of control diarrhea that, three weeks in, I had to stop teaching for the semester.
I also didn’t realize how dehydrated I was getting until I woke up one morning with impaired vision. My vision was so blurred that I couldn’t read. I went to the eye doctor, who told me there was nothing wrong with my eyes… it was my brain, suffering from the dehydration.
I ended up in our infirmary from Feb.6 to April 8… continuing to go for treatment each day, but also getting IV fluids, and being monitored by the nurses. The doctors all told me that my vision would eventually clear up, and it finally did, in May. But up until then, I thought I would never read again, or drive again, or teach again. It was a very hard time for me.
However, the treatment killed the cancer. I’ve been cancer free, with clear PET scans, ever since...
...Something no one told me when I was going through treatment was about the radiation damage, the long term damage. I found out about this, when the damage began to show up, and then, when I read the cancer boards and blogs on the Internet. So many other persons have the same kind of damage...
...that most of us as survivors are just glad to be alive and to be functioning. To go back to living a normal, ordinary life again is what we really want, and we treasure those ordinary, undramatic days that we have been given...

Then I read them three poems, two of which were posted earlier. The third one, "Henrietta Lacks as Rose Red," is still really unfinished. I told them her story and read them two stanzas of the poem. It is a hard poem to read:

She kept her nails short, but she painted them crimson.
Toes, too, so that even at the autopsy, the assistant saw the chipped red on the dead toes and knew this was a woman who loved beauty and color,
Who loved Clover, Virginia and its fragrant foliage,
Who loved to cook spaghetti for her hungry cousins,
Who loved to go dancing.

From what furnace of hell did that cancer come,
That viscious vicious virulent voracious purple grape
Called Adenocarcinoma?
Was it radiated by her husband’s philandering
Returned
Before the Hopkins radium tried to kill it?

So that was the first talk.

The second talk is coming up on March 23. I'm talking to a parish group about poetry about Jesus' passion and death. I've given this talk before, so I am just revising and refining it, perhaps finding some better poems.

The third talk is April 3, at the Theology Honor Society Induction at the Mount. I have not yet settled on a topic. I know that the subject will be something about poetry and spirituality, but I am not yet sure what. Today I was toying with the idea of talking about the poetry of Geoffrey Hill, but I really don't know enough about his poetry to do justice to it in a talk. I am also toying with the idea of giving a dramatic reading of my friend Kate Daniels' long dramatic poem "In the Marvelous Dimension" but haven't really decided yet.

In the meantime, I need to return to paper grading and journal reading, and to my own writing.
I am ashamed at how little I have written in these months.

We had five inches of snow last night; just when we thought Spring was imminent. The daffodils are up about two inches in my garden, but now they are covered with snow again.
Posted by Anne Higgins at 2:51 PM 1 comment: Links to this post