An Active and Personal Devil 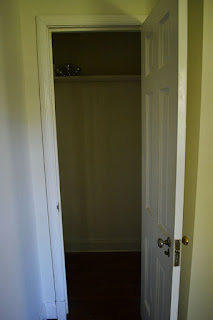 When I saw that the "Today's Post"  prompt was “Closet” ,  I immediately thought of the closet in my bedroom of my childhood home.  I used to play in there occasionally; close the door and sit down in the dark and imagine all kinds of things.

In my later years, that closet shows up in this poem:

An Active and Personal Devil

It has been reported by the New York Times…that as technology increases, more and more people are coming to believe in an active and personal devil. - Miller Williams

The door was wood, with peeling paint


and a china doorknob


black cracks, but not chapped.


The door was closed,


but not too hard to open.


The devil sat behind the door,


hunched over a table, hiding.


She was thin and young.


I asked her why and she looked at me


and did not answer.


I left her, but left the door ajar.


I felt in my shoulders


They tell me to watch out,


that I’m letting my heart go.


with a black tile floor.


In back of it waits a


thin cherry door, a hoard of


I see the door leads to another country,


Backed up by a stone


In a deep summer forest. 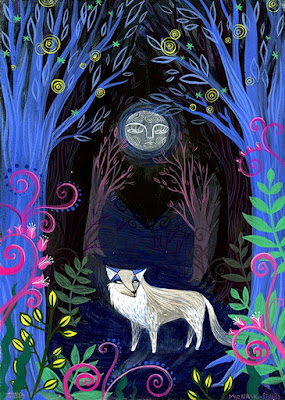 Enchanted Forest, by Myrna Stubbs
And the mythical beast, the Lamia:

Posted by Anne Higgins at 6:55 AM No comments: Links to this post

The Breath of God This poem by Denise Levertov speaks to me about the breath of God:


In Whom We Live and Move and Have Our Being

Birds afloat in air’s current,
sacred breath?  No, not breath of God,
it seems, but God
the air enveloping the whole
globe of being.
It’s we who breathe, in, out, in, in the sacred,
leaves astir, our wings
rising, ruffled — but only the saints
take flight.  We cower
in cliff-crevice or edge out gingerly
on branches close to the nest.  The wind
marks the passage of holy ones riding
that ocean of air.  Slowly their wake
reaches us, rocks us.
But storms or still,
numb or poised in attention,
we inhale, exhale, inhale,
encompassed, encompassed.

Merlin on the wire on Bayshore Road


The memory moves faster than the pen.
The merlin lands minutely on the wire,
But flashes off in sunlight as I near.

Behind my eyes are attics full of rooms
whose only access lies in photographs.
The merlin lands minutely on the wire.

That window overlooking maple trees,
where winter sunsets blazed in molten red,
It flashes off in sunlight as I near.

The snowbird that I rescued Easter day
lay stunned but blinking, heating up my hand.
The memory moves faster than the pen.

The morning kitchen silence breaks and hums,
The rubythroat appears, and chirps, and drinks,
he flashes off in sunlight as I near.


The face of one long dead begins to form.
I see his thick brown hair wave in the wind,
He flashes off in sunlight as I near.

The breath of God upon my neck, so clear
and sudden once in one of those close rooms…
The memory moves faster than the pen.

I reach into the ocean’s briny mouth.
My hand emerges empty, wet with tears…
The memory moves faster than the pen. 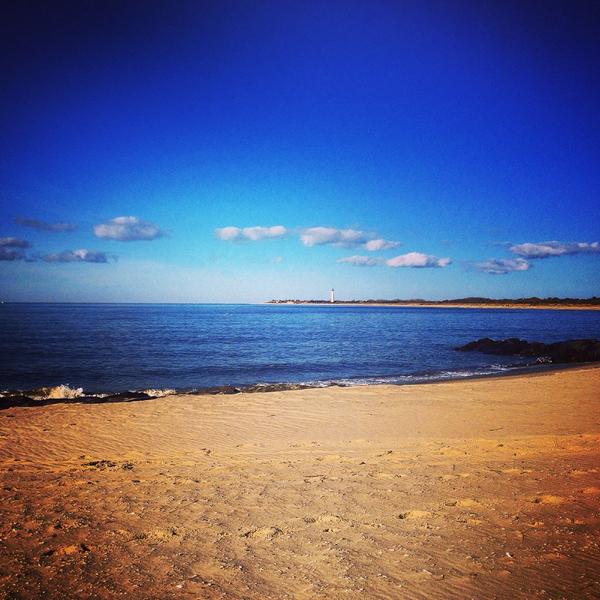 Posted by Anne Higgins at 9:28 AM No comments: Links to this post

The Leaping Greenly Spirits of Trees

Can't believe it's been so long since I wrote.

I spent a number of hours rehearsing with the Lab Band at the Mount. Two of the students and the young professor who directs the band composed music to go with thirteen of my poems from Reconnaissance. Other students read the poems used by the two student composers, and I read the six poems that Mark used.  We put on this show for two nights - March 21 and 22.  It was an exhilarating and affirming experience for me.  I had never had anyone pay such close attention to my poetry!

Those rehearsals, and preparing for classes and marking papers, took me up to the Easter holidays.

At the very end of March, that next week, I was busy with my college alumnae reunion.  It's an all-class reunion; since my college closed in 1973, it is amazing that we still meet, but we do. I'm on the alumnae board, and so I get to go every year.  Over the years I have become friends with some marvelous women who were not even on the campus during the four years I attended.

I had intended to write a poem a day in April as I did last year, but I have not been able to get down to it.  I don't exactly know why; I've had the time - more time than I had last year.  But I have been preoccupied with plans for the garden in the courtyard. Have spent many hours fantasizing about that.
Now I am finally able to get out there and plant some new things, and rejoice that the transplants from last year have survived and are emerging.

Then I've been escaping into the Matt Scudder novels - a detective series by Lawrence Block.

Now, I am trying to get back to writing.

Again, I'm using the prompts from The Daily Post. Lately they have been one word prompts.

What came to mind for me was the wonderful color of green which now carpets the lawns and clusters on the trees.

I always think of e.e. cummings' poem "i thank you god for most this amazing day."

i thank You God for most this amazingday: for the leaping greenly spirits of trees
and a blue true dream of sky; and for everything
which is natural which is infinite which is yes


The leaping greenly spirits of trees where I live: 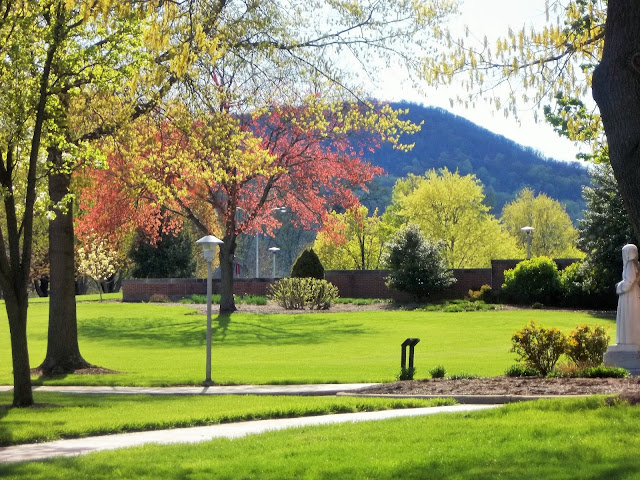 Posted by Anne Higgins at 11:20 AM No comments: Links to this post