A Poem by Kay Ryan

I greatly admire Kay Ryan's poetry -  the compression, the word choice, the zap at the end of many of her poems.
On this very dreary rainy January afternoon ( have I said this before?) the Mockingbirds are still feisty and active.


Nothing whole
Is so bold,
we sense. Nothing
not cracked is
so exact and
of a piece. He’s
the distempered
emperor of parts,
the king of patch,
the master of
pastiche, who so
hashes other birds’
laments, so minces
their capriccios, that
the dazzle of dispatch
displaces the originals.
As though brio
really does beat feeling,
the way two aces
beat three hearts
when it’s cards
you’re dealing. 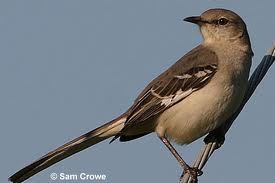 Posted by Anne Higgins at 1:01 PM No comments: Links to this post

A Poem by Wallace Stevens

In the lull between writing some new poems of my own, I’m using this blog to post some of my favorite poems.  I love this one by Wallace Stevens.  Even on an icy January afternoon, it carries me off:

The House Was Quiet And The World Was Calm


The house was quiet and the world was calm.
The reader became the book; and summer night


Was like the conscious being of the book.
The house was quiet and the world was calm.


The words were spoken as if there was no book,
Except that the reader leaned above the page,


Wanted to lean, wanted much to be
The scholar to whom his book is true, to whom


The summer night is like a perfection of thought.
The house was quiet because it had to be.


And the world was calm. The truth in a calm world,
In which there is no other meaning, itself


Is calm, itself is summer and night, itself
Is the reader leaning late and reading there. 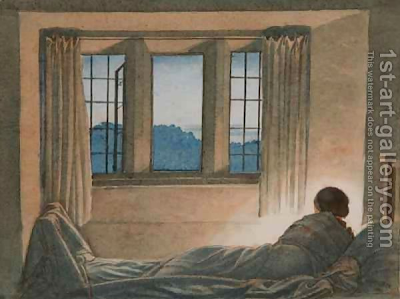 I read this poem by Eamon Grennan several years ago on one of those "Poem a Day" calendars. It has haunted me ever since, though I lost the paper on which it was printed. Finally I located it again:


I was watching a robin fly after a finch—the smaller
chirping with excitement, the bigger, its breast blazing, silent
in light-winged earnest chase—when, out of nowhere
over the chimneys and the shivering front gardens,
flashes a sparrowhawk headlong, a light brown burn
scorching the air from which it simply plucks
like a ripe fruit the stopped robin, whose two or three
cheeps of terminal surprise twinkle in the silence
closing over the empty street when the birds have gone
about their business, and I began to understand
how a poem can happen: you have your eye on a small
elusive detail, pursuing its music, when a terrible truth
strikes and your heart cries out, being carried off. 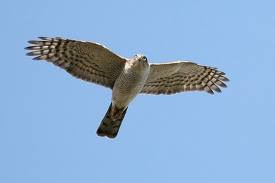 Sparrowhawk (also known as Sharp-shinned Hawk) photo by Patrick Meharg
Posted by Anne Higgins at 11:34 AM 2 comments: Links to this post

Our University returns to school today. We always have classes on MLK Day, even though it is a Federal holiday.  I am glad, because I begin the semester with the freshmen by reading King’s “Letter from the Birmingham Jail,” which is a masterpiece of rhetorical writing as well as a clear statement of his beliefs about just and unjust laws, civil disobedience, and  non-violent direct action .   It helps to remember what the demonstrators were fighting against.


Later in the semester , we will be reading this poem:


“Mother dear, may I go downtown
Instead of out to play,
And march the streets of Birmingham
In a Freedom March today?”

“No, baby, no, you may not go,
For the dogs are fierce and wild,
And clubs and hoses, guns and jails
Aren’t good for a little child.”

“But, mother, I won’t be alone.
Other children will go with me,
And march the streets of Birmingham
To make our country free.”

“No, baby, no, you may not go,
For I fear those guns will fire.
But you may go to church instead
And sing in the children’s choir.”


She has combed and brushed her night-dark hair,
And bathed rose petal sweet,
And drawn white gloves on her small brown hands,
And white shoes on her feet.

The mother smiled to know her child
Was in the sacred place,
But that smile was the last smile
To come upon her face.

For when she heard the explosion,
Her eyes grew wet and wild.
She raced through the streets of Birmingham
Calling for her child.

She clawed through bits of glass and brick,
Then lifted out a shoe.
“O, here’s the shoe my baby wore,
But, baby, where are you?” 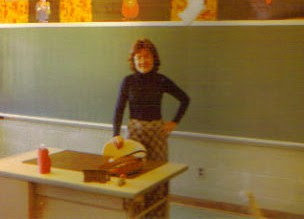 This blurry photo is of me in my first year of teaching, back in the Fall of 1972.  I can't believe that I have been teaching for almost forty years!

This morning I received an online greeting from a student I taught back about 30 years ago, at a high school in Petersburg Virginia. She wrote:
Posted by Anne Higgins at 3:21 PM 6 comments: Links to this post

When a poet leaves to see to all that matters,
nothing has changed. In treasured places still
he clears his head and writes.


None of his joie-de-vivre or books or friends
or ecstasies go with him to the piece
he waits for and begins,


nor is he here in this. The only work
that bonds us separates us for all time.
We feel it in a handshake,


a hug that isn't ours to end. When a verse
has done its work, it tells us there'll be one day
nothing but the verse,

he goes his way delighted.

This is the beginning of  Part Three of Auden's long poem "For the Time Being":

Well, so that is that. Now we must dismantle the tree,
Putting the decorations back into their cardboard boxes --
Some have got broken -- and carrying them up to the attic.
The holly and the mistletoe must be taken down and burnt,
And the children got ready for school. There are enough
Left-overs to do, warmed-up, for the rest of the week --
Not that we have much appetite, having drunk such a lot,
Stayed up so late, attempted -- quite unsuccessfully --
To love all of our relatives, and in general
Grossly overestimated our powers. Once again
As in previous years we have seen the actual Vision and failed
To do more than entertain it as an agreeable
Possibility, once again we have sent Him away,
Begging though to remain His disobedient servant,
The promising child who cannot keep His word for long. 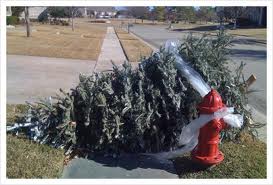 Posted by Anne Higgins at 7:26 AM No comments: Links to this post

A Poem from Rilke

In my MOD CIV class, I'll be reading poems with the class as well as looking at the history of Europe from about 1850-2001.  This is in addition to the books the students will read ( see earlier post).

Anyway, here is the first poem we will meet:


The future: time's excuse
to frighten us; too vast
a project, too large a morsel
for the heart's mouth.

Future, who won't wait for you?
Everyone is going there.
It suffices you to deepen
the absence that we are.

Translated by A. Poulin
Posted by Anne Higgins at 1:19 PM No comments: Links to this post

The Twelfth Day of Christmas

I probably should have started counting days on Dec.26 instead of 25, so that January 6 would be the twelfth day.  So it goes.

Anyway, I am heading out to Pennsylvania this afternoon to visit friends for weekend, so I will be away from the computer on Jan.6.

So here is the Epiphany card: 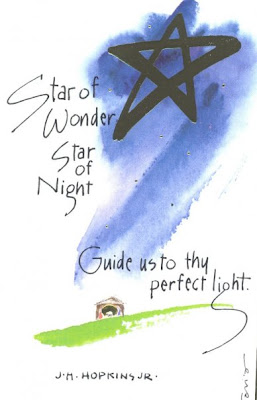 Posted by Anne Higgins at 7:31 AM No comments: Links to this post

The Eleventh Day of Christmas

Elizabeth Ann Bayley Seton died on this day, in this valley, in 1821.

The portrait was done when she was a young married woman, in New York City. 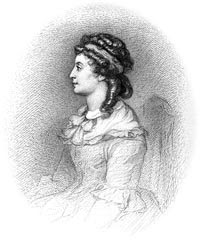 She married at 19, had 5 children, and was widowed at 29.  A few years later, she converted to Catholicism and moved to Baltimore, where she founded the community of the Sisters of Charity, and the first  free Catholic school for girls staffed by sisters in the country.  Here's a poem I wrote about her a few years back:


Mercy was your favorite word.
How many times
underlined in psalm and margin
by your wondering hand.
Mercy -on your eye
tears,
the sea, and thanks.
Mercy – vows
in an underground chapel-
let us not forget
our communion
of tomorrow.
Mercy-
thinking sea voyages,
passages to heaven,
thinking
how children breathe
their first
earth.

The Tenth Day of Christmas

Cooper's Hawk in the Courtyard this morning!

Probably an immature female -  very large , but still brown back and brown streaks on breast - not that slate grey back and brick speckled breast yet...  I didn't have my camera with me, and it doesn't have the kind of lens needed to capture her trip from one crab apple tree to the next in the frosty air.  Here's what she looked like though - photo from Google and Wildbirds Unlimited: 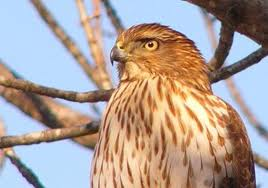 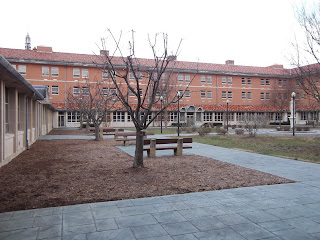 I was thrilled to see her -  needless to say, the juncos and finches were not!


Today I worked on course work, and sent out book lists to the students.
Here is the list of books I sent to the MOD CIV class.  In addition to the History text, and the poetry, each student must choose one of these books ( one to a customer), read it and prepare a presentation on it to the class.  Since they come from all majors, hopefully they can find a book relevant to their particular approach to this time period:

1996   Eastern Europe  *Bury Me Standing: The Gypsies and Their Journey (NF) Isabel Fonseca

The Ninth Day of Christmas

Since it is still the Christmas season, here's a card I once received from Sister Marita Ganley SC: 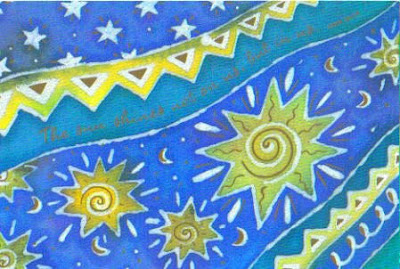 I'm turning my mind back to school... still have two weeks before the Spring semester begins, but I have a good deal of revising in process on the syllabi for two of the three courses I teach.  Today I am working on Mod Civ - that's what we all call  CVEN 201 -  The West in the Modern World. It's the History of Europe from roughly 1850 to 2000.  I teach the history with poetry.  What I hope is that it becomes the Chaucer method of history:  teaching the big events , but through the eyes of the people who lived through them.  I use poetry for this. My students and I read and study about forty poems from European and British poets of that era.  The first one we meet is Rilke.  Here is his poem entitled
"The Future":

The future: time's excuse
to frighten us; too vast
a project, too large a morsel
for the heart's mouth.


Future, who won't wait for you?
Everyone is going there.
It suffices you to deepen
the absence that we are.

Posted by Anne Higgins at 7:13 AM 2 comments: Links to this post

I'm starting out by posting this wonderful "New Year's Carol"  by Benjamin Britten:


Sing reign of Fair maid
With the gold upon her toe
Open you the west door,
And let the old year go

Sing reign of Fair maid
With the gold upon her chin
Open you the east door,
And let the new year in

For we have brought fresh water
All from the well so clear
To wish you and your company
A joyful happy year.


And here's another favorite Christmas card. It's appropriate, for January 1 is also the feast of Mary, the Mother of God: 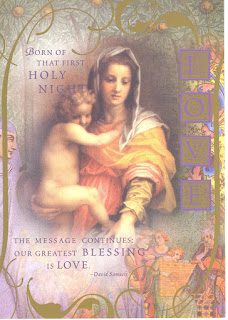 Posted by Anne Higgins at 11:30 AM No comments: Links to this post