Yesterday I drove almost four hours to the other end of the state to St.Mary's College of Southern Maryland. I'm attending their first annual Chesapeake Writers' Workshop.  About forty writers are here, in four groups of ten:  two groups for fiction, one for creative nonfiction, and one for poetry.
Haven't had the first poetry workshop session yet, but so far it has been fun.  The campus is very beautiful --- surrounded by water, with campus buildings that remind me of Williamsburg. It's birdwatching heaven as well. 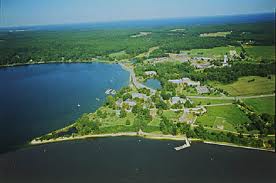 Posted by Anne Higgins at 8:18 AM No comments: Links to this post

On the perception of time

That's a mysterious and abstract title for what is probably a common realization.


Back in the summer of 2010, when I was visiting my mom  in the nursing home, I was looking at this 8X10 framed photo on her dresser: This was taken in 1941, of my mother and her five brothers.  I know it was 1941 because my Uncle Al is in uniform. I would love to know the location and story of the house in the background.
What struck me was that I always thought of 1941 as ancient times, very far in the past. It hit me that day that 1941 was only seven years before I was born!  And that 2003, when this photo was taken, 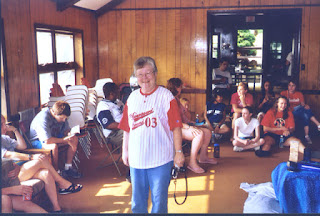 of me, at the "Mountward Bound"
retreat for the incoming freshmen ( I worked in Campus Ministry then), was much more distant in time from my birth -  fifty-five years!
I lived in what, to my students, are the dark ages, the ancient times. Yet they seem to me to be not so far away.
I guess I especially have been thinking about this since last Sunday, when I visited one of my high school teachers -  one of my favorites . We hadn't seen each other since about 1972, or maybe even before that.  He is only ten years older than I am,  but at age fourteen, age twenty-four seemed so old.
I looked into his face ( still handsome) and saw the face of that twenty-four year old.  This must be the way my former students see me --- the students I taught when I was twenty-eight and they were eighteen.  Several of them have been visiting me in recent years.

Maybe this miserable heat has been cooking my brain  But the passage of time just fascinates me.
I remember that old Rolling Stones song  "Ti ---me  is on my side, yes it is"  Not any more.

Posted by Anne Higgins at 7:55 AM 2 comments: Links to this post