It's all about the money 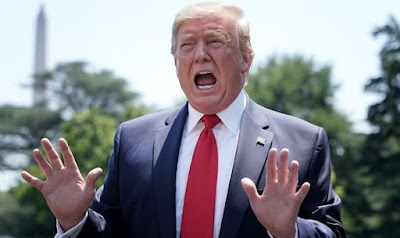 On this last day of July, I am still wasting a lot of thought time on Donald Trump.  I am so worried about our country.

The other night on the Rachel Maddow show, Jamie Raskin said some things that really rang true. I looked up the transcript:


REP. JAMIE RASKIN (D-MD):  A lot of people believe we`ve been in an

impeachment inquiry ever since we started looking into potential high
crimes and misdemeanors and the misconduct of the executive branch.  Other
people thinking impeachment query doesn`t begin until you actually have
articles of impeachment.  I would say we are in an impeachment
investigation.

RASKIN:  Sure, we were just confronted with overwhelming evidence of high

But I would say that our investigated future involves a lot of other
issues.  You know, I think the American public has the sense that money is
really at the heart of the Trump White House and he has essentially
converted the presidency into an instrument of self enrichment a money-
making enterprise basically for himself and his business and his friends,
and that`s what the whole federal government has turned into.

And so, we need to investigate whether the foreign Emoluments Clause,
Article 1, Section 9, Clause 8 has been violated and is being violated
every day.  There have been reports that different foreign governments have
basically been filling Donald Trump`s pockets through the Trump hotel,
through the office tower, through the golf courses.  There`s the domestic
Emoluments Clause which says that he`s limited to receiving his salary.  We
can`t increase it, we can`t decrease it.  And yet every time they go to
Mar-a-Lago, for example, they`re spending $75,000 or $100,000 that goes
directly from federal government agencies and departments to the Trump
hotel.

So, that I would say should be the beginning of following the money but we
remember that Donald Trump said that he would basically blow up the special
counsel investigation if they looked at his finances.  He`s not going to be
able to hamstring.  The U.S. Congress in the same way.  We`re going to get
to the bottom of all of it.


Posted by Anne Higgins at 3:17 PM No comments: Links to this post 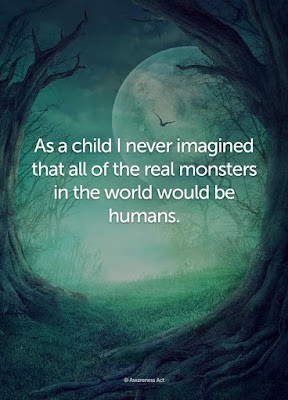 I have been reading a book by Doris Kearns Goodwin:  Leadership in Turbulent Times.

In her book  Kearns looks at four presidents: Lincoln, Teddy Roosevelt, FDR, and Lyndon Johnson, and particularly examines how each one handled a particular crisis in his presidency.

I read the section on Lincoln’s crisis first.  It was about the Emancipation Proclamation, and his strategy for making it take.   It also talked about Lincoln’s choice of cabinet members of all his rivals, something Donald Trump would never do.

But this description hit me because it made me think of the present time.
It was about Teddy Roosevelt’s time:
“The dangers of the age: the rise of gigantic trusts that were rapidly swallowing up their competitors in one field after another, the invisible web of corruption linking political bosses to the business community, the increasing concentration of wealth and the growing gap between the rich and the poor, the squalid conditions in the immigrant slums, the mood of insurrection among the laboring classes.”(244) 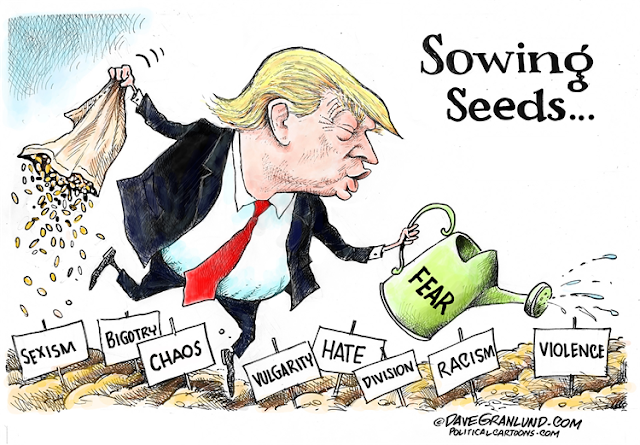 And then, there’s Sinclair Lewis:


"A vain, outlandish,anti-immigrant, fear-mongering demagogue runs for President of the United States – and wins. Sinclair Lewis’s chilling 1935 bestseller is the story of Buzz Windrip, who promises poor, angry voters  that he will make America Proud and prosperous once more, but takes the country down a far darker path. As the new regime slides into authoritarianism, newspaper editor Doremus Jessop can’t believe it will last – but is he right? This cautionary tale of liberal complacency in the face of populist tyranny shows it really can happen here." 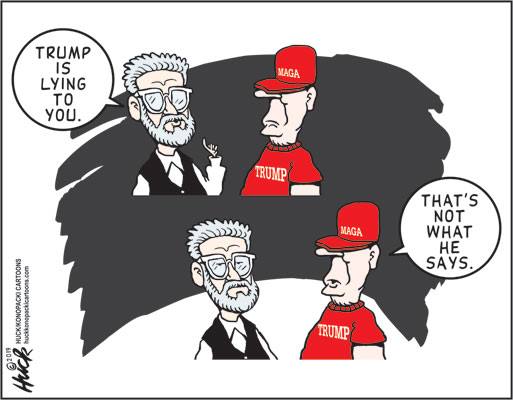 Posted by Anne Higgins at 1:19 PM No comments: Links to this post

Trump stirs up his cult 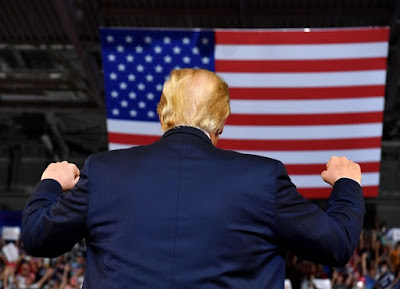 At a rally in North Carolina recently, the President of the United States deliberately stoked up the coals of racial hatred as he attacked four Democratic congresswomen of color, particularly Rep. Omar. The crowd chanted "Send her back!"   but this woman is an American citizen and an elected official.

The cartoons and memes reacted.  Here are some of them: 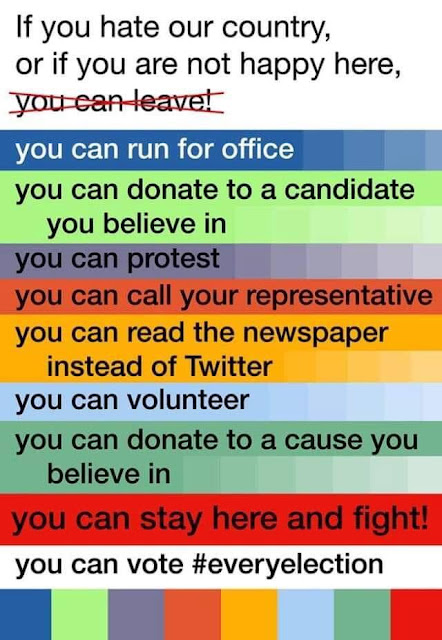 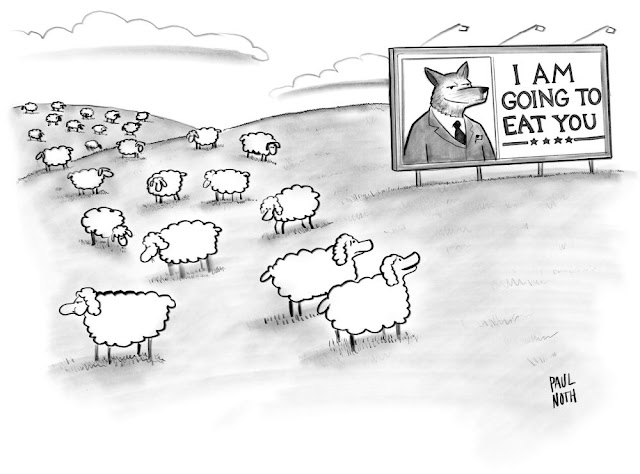 and an old favorite of mine: 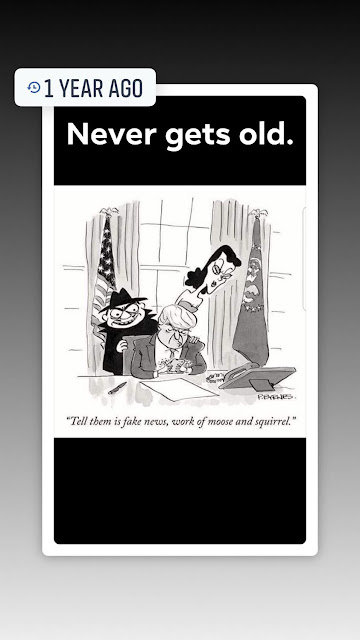 Posted by Anne Higgins at 8:13 AM No comments: Links to this post

Everyone's Gone to the Moon 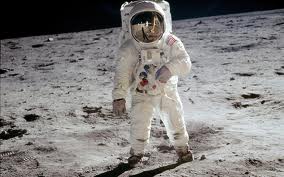 I just can't believe that fifty years have passed since the moon landing.   I remember it well.

I wrote this poem about it  ( sort of )  perhaps thirty years later:

Everyone’s Gone to the Moon

Rousseau painted the gypsy sleeping under the full moon
in dazzling deep cobalt sky ,
dreaming face like a totem serene
in a dream of lute music.
Pipe song,
grazing wildeyed lion
huge behind him
standing guard over his dreams
bedhead mane stiff with moonlight
eyes wild white balls and staring corneas
tail at the alert

1969 and I’m serving drinks
at the Country Club,
so glad to be 21 and able to serve drinks.
The golfers at the bar stare with wild white eyeballs
at the tiny moonman in his white spacesuit
moving jerkily on the cratered surface
faceless, the glass in his helmet shining back
the distant earth
and I notice it without much excitement,
immersed as I am in being 21 years old,
thinking this will happen a lot
from now on.
In my dreams. 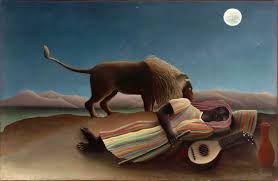 Posted by Anne Higgins at 4:09 PM No comments: Links to this post 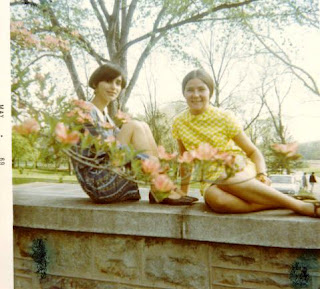 "All Together, all together, still, still we meet... 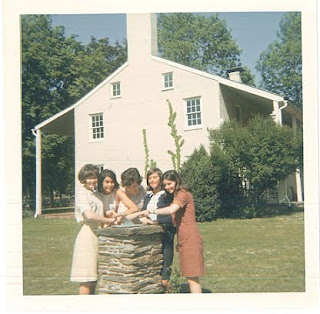 Hearts and voices light as ever, Alma Mater, thus we greet... 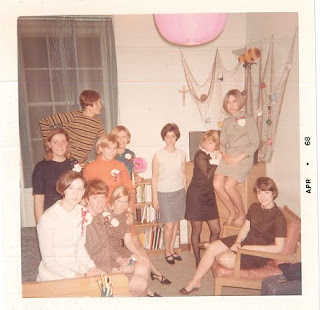 Friendship's links may ne'er be broken, bright is its chain 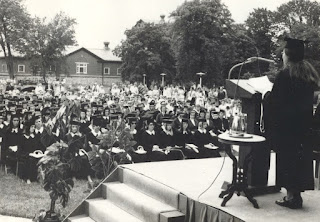 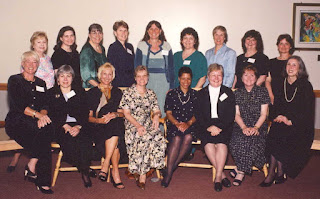 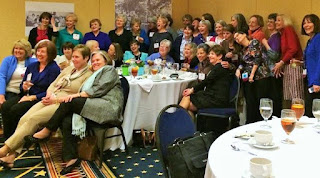 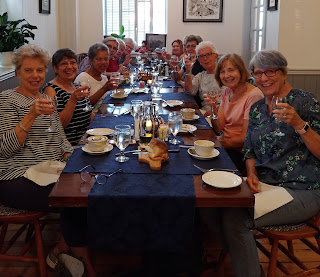 Thirteen of us got together this past week to plan our fiftieth college reunion, which will take place in March, 2020.  We partied, too.

Posted by Anne Higgins at 6:02 AM No comments: Links to this post

A true garden is never finished 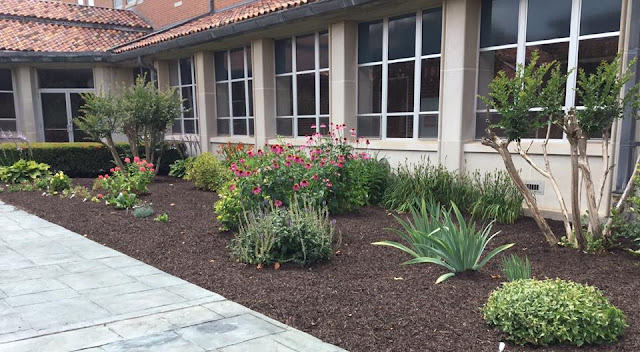 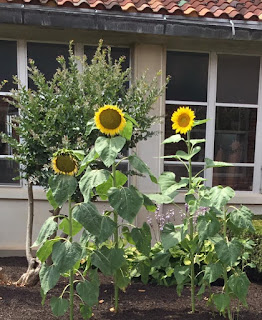 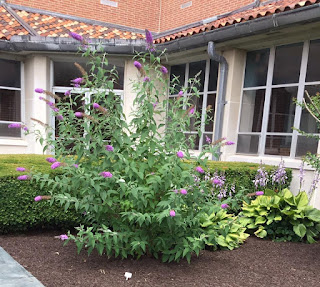 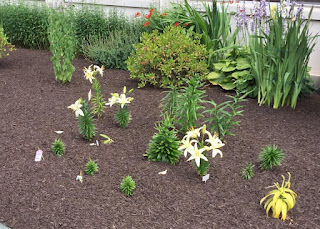 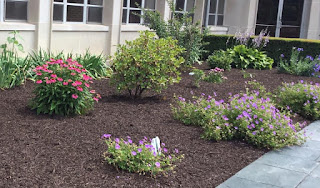 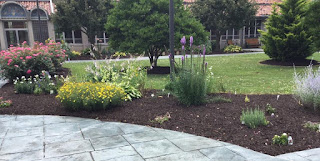 I've had successes and failures in the courtyard garden so far this summer.

The successes have been the perennials planted two, three, four years ago, which have prospered and grown.  Also the Swamp Milkweed which came up by itself...

One big failure was my fault:  I killed my beautiful Borage with too much water. The stem rotted at the base.  I've saved many seeds from it, though, and hope to have it again.

The Artichoke withered and died, too.  Don't know why.
And the flowers I attempted to start from seed?  Only Queen Anne's Lace  and  Larkspur made it.
The others:  Stock, Mignonette, and Shirley Poppy sprouted, but overnight one night some creature came and ate the seedlings!

Then the grounds guys came and did some necessary weeding and thinning and mulching. That was great, except the person wielding the weedkiller spray hit some of my plants, too.  That way I lost the Cleome, the Scabiosa, the Calendula, and possibly some of the Larkspur.  So it goes.


I read May Sarton's diary of her gardening,  Plant Dreaming Deep,  a long time ago and should try to find it and read it again now that it will mean so much more .  One thing she says:


"Gardening gives one back a sense of proportion about everything - except itself."


Posted by Anne Higgins at 1:42 PM No comments: Links to this post 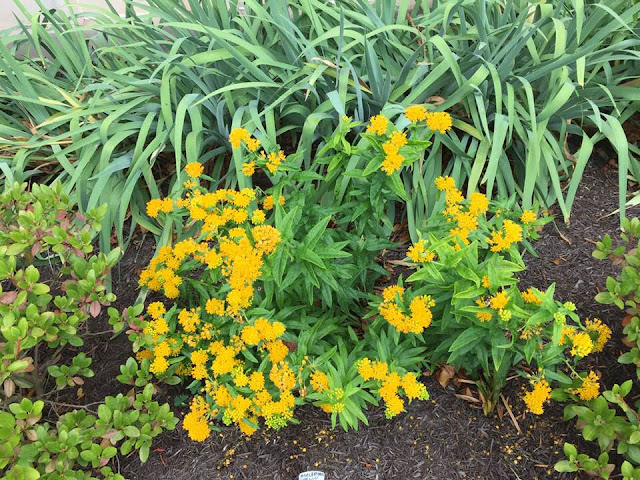 "Gardens are not created or made, they unfold, spiraling open like the silk petals of an evening primrose flower to reveal the ground plot of the mind and heart of the gardener and the good earth." 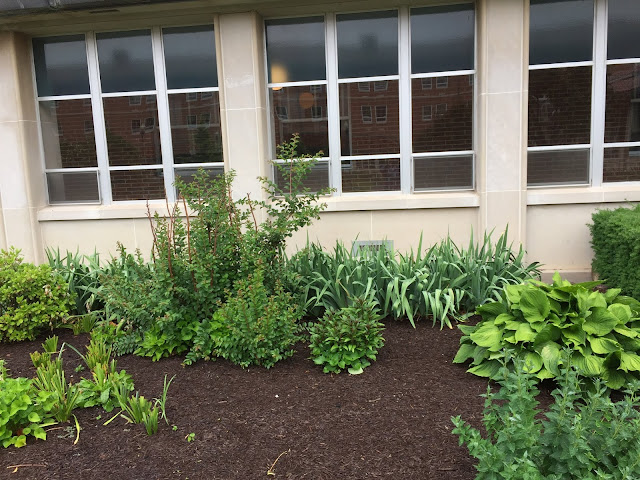 Posted by Anne Higgins at 6:38 AM No comments: Links to this post