Between Fine and Dead 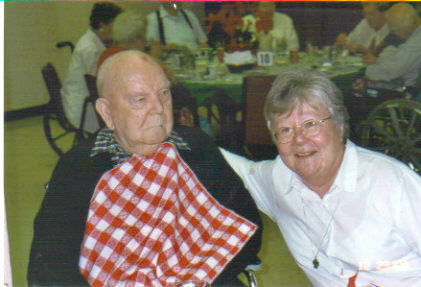 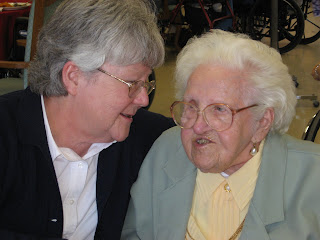 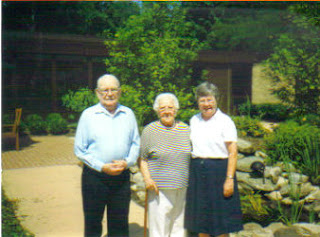 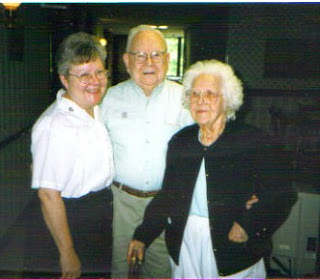 Yesterday I listened to a podcast on the wonderful radio program called “On Being.”
This one was an interview with Jane Gross  who created the “New Old Age” blog in the New York Times about working with her aging mother, and who ultimately wrote a book about her experience.           .
This podcast was called  “The Far Shore of Aging”.            .
I was taken with this podcast, because it reflected so much of my own experience with caring for my parents up until each one died – my Dad, in the summer of 2007, and my Mom, in the autumn of 2010.
One of the lines that struck me was her observation that those of us who are middle-aged don’t think much about the space between “fine” and “dead” until we are in that space with our parents.  How true that is!   She also said that we never know how long that space will be, or what will be contained within it.
It made me think that my parents were “fine” until they reached their late seventies. Then, my mother’s eyesight and memory began to go, but slowly. They were living in an apartment by then, still assuming that they were fine.  However, my father had started to do the cooking and the cleaning because of my mother’s macular degeneration.  The crisis came at Thanksgiving the year that  he was 83 and she was 82; I was at home visiting when it happened.He developed the symptoms of what was  prostate cancer and had to have a catheter until his surgery. He became depressed over this, and asked me to “get us into Emmitsburg.” This was the nursing home located in the large house where I live.  I told him that they weren’t sick enough to get in that nursing home – but asked him if I could look for an assisted living place for him and Mom.
Blessedly, he said yes.  Thus, he spared me the agony that some of my friends have endured – parents who refuse to leave their homes, no matter how disabled they become.
So, in the summer when he was 84 and she was 83, I moved them to Baltimore , into the assisted living part of the Little Sisters of the Poor’s home for the elderly.  They loved it there. It is a beautiful place with lots of big trees and gardens surrounding it, and is all on one floor with long corridors and wings, and smaller units thoughout. Though they had always been homebodies and fairly non-social, they both enjoyed the social activities and made friends with the other residents.
This went on for almost two years, but they were both gradually declining. Especially my father,
Who developed Alzheimers. I won’t go into all the details, but he had a personality change, began to have trouble with tasks that used to be second nature for him ( like counted cross stitch)
And began to display distorted thinking. The crisis came when he went AWOL with their car
And was gone all day on a snowy February weekday.  The State Police found him up in West Chester, getting gas for the car, and cheerfully thinking nothing out of the ordinary had happened.  I had to get someone to drive me to West Chester, and then get him and the car and drive him back to Baltimore.  After that, the Little Sisters told me to take the car and not return it.  That was one of the worst times for me.
When she was 86 and he was 87, medical emergencies caused them to be moved into the skilled care part of the home.  The sisters and the nurses and aides could not have been more loving and skilled.  Then I began the horrible process of applying for Medicaid for them. That involved months of “spending down” their money, assembling the paperwork, filling out the applications, etc. The social worker at the home was very helpful, but the caseworker for the State of Maryland was so awful – cold, unsympathetic, and , to me, downright cruel. Eventually they both qualified, so that the home could get the funds they needed to pay for my parents’ care.
While I was going through this, I experienced huge amounts of anxiety and stress… which took its toll on my own health.  I was working full time while all this was going on as well -  but I still was more fortunate than many people who don’t have their parents in a care-giving facility, and who have to physically care for their parents and maintain their parents’ homes.
Again , I won’t go through the description of all the incremental losses. He died at age 93; and she died at age 95, both , very peacefully, and in a place where they were well cared for and well loved by everyone.
That space between “fine” and “dead” lasted about fifteen years for them and for me.
As  Jane Gross said in the podcast, the adult children then look at their own lives and wonder how long that space will be for them, personally.  I know that physically I have already left “fine” but am in “mostly fine” with five medical crises behind me. I see some of my peers walking with canes, and am glad I still have limber limbs and bones and back.
It is thought provoking, though, to know so much life is behind me.
Posted by Anne Higgins at 7:37 AM 2 comments:

Visiting the Chapters of the MWA

Last evening , in the 100 degree heat, I travelled down Rt.15 South to Rt.70 East to Rt.32 into Columbia MD, to the Sunrise Senior Citizen Living Residence, where the Howard County Chapter of the MWA held its August meeting. I don't know exactly why, but I was expecting to be on a panel , presenting in a large room with an audience of senior citizens and MWA members, talking about the experience of having my poems published in the MWA's anthology Life in Me Like Grass on Fire, and comparing that experience to having books of my own poetry published. Not so.

The activity bulletin board at the center had no listing for our panel;turns out that the Chapter meets there , in a small multi-purpose room , rent free, courtesy of the center. Three of us on the panel:Vonnie Winslow Crist, Eric Goodman and I, were joined in a discussion by Danuta Hinc, and about six other members of the Howard County Chapter. I was initially disappointed, but it turned out to be a good and interesting discussion about a variety of aspects of publication, and I enjoyed meeting the other writers.

Now I'm going to check out their blogs and web pages!

I'm hoping to attend another one of these in Anne Arundel County in August.
Posted by Anne Higgins at 5:30 AM No comments: 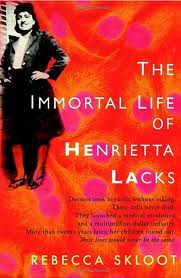 It's coming from the center of the country; it's already here, and mounting. Humidity makes it worse. I hesitate to complain, since I have the privilege of living in air conditioning. Thinking about those who don't, especially the elderly.

I've been writing, working on the new manuscript. Here's one from it, written after I read The Immortal Life of Henrietta Lacks :


Henrietta Lacks, like Rose Red
kept her nails short, but painted them crimson.
Toes, too, so that even at the autopsy,
the assistant saw the chipped red on the dead toes
and knew this was a woman who loved beauty and color,
Who loved Clover, Virginia and its fragrant foliage,
Who loved to cook spaghetti for her hungry cousins,
Who loved to go dancing.
From what furnace of hell did that cancer come,
That viscous vicious virulent voracious purple grape
Called Adenocarcinoma?
Was it radiated by her husband’s philandering
Returned
Before the Hopkins radium tried to kill it?
Pearls of it studded her insides
By the time it blocked her bladder
and poisoned her with her own fluids.

Here's a draft of the poem that gives the title;


A Vexed Question
Said the witch,
Preferring a hexed one,
A vixen caught by the paw,
Chewing her foot off
To set herself free.
Vexed question
Vexing, missing, shifting
From why to how
Point of law
Often discussed or agitated,
Never determined or settled.
Difficult and troubling
What is not forgiveness?
What is not to forgive?
What’s the virtue in resentment?
Send again the sentiment?
The sediment?
Presentiment?
I know... they both need more work. Working on it.
Did I say that many of these poems come out of my experience of cancer/cancer treatment?
After two years, I am finally able to tackle this topic.
Posted by Anne Higgins at 7:27 AM No comments: 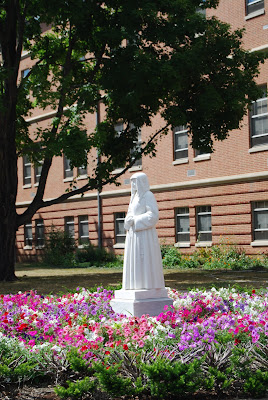 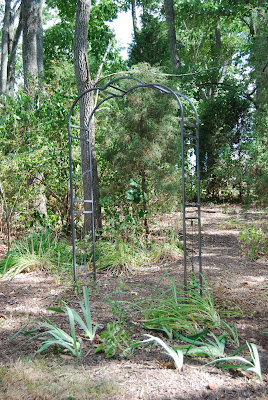 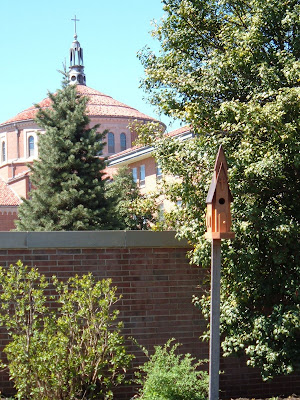 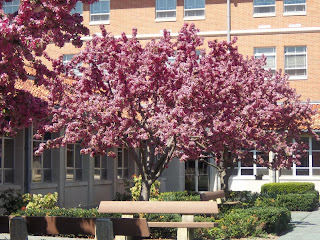 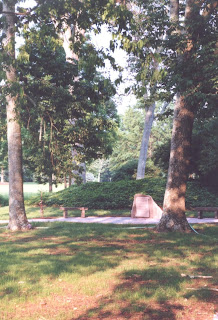 I belong to a Religious Congregation, the Daughters of Charity of Saint Vincent de Paul. The community was founded in 1633 in Paris, but its US foundation came in 1809, right here in Emmitsburg Maryland, where I live.

It's a large apostolic community with about 80 provinces all over the world. The founding US province in Emmitsburg eventually became 5 US provinces, but this month we are going back to 2 provinces in the US, primarily due to fewer members. The Provincial House for this combined province will be in St. Louis MO, so very shortly, Saint Joseph Provincial House in Emmitsburg will no longer exist. The big building is morphing into "Saint Joseph Ministries" comprising the residence for our retired sisters as well as a skilled care facility for other people, and, hopefully, HUD-funded single apartments for the elderly.

I hope to continue living here and teaching over at the Mount. And writing and birding and gardening.

Attached is a nine minute slide show video of some of the faces of our sisters, and some scenes of the building, that I took over the last 15 years:

St.Joseph Provincial House
Posted by Anne Higgins at 6:27 AM No comments: 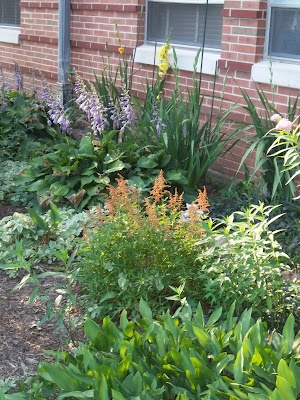 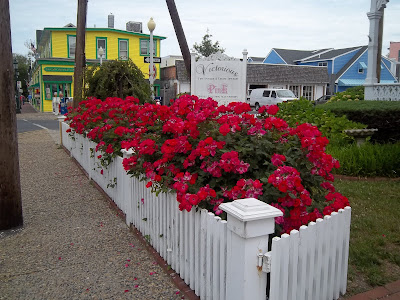 Where have these weeks gone? I feel guilty for not adding to this blog. I've been out of school... no excuse.
One week spent at Cape May
Four days spent in Cincinnati
Two weekends spent working with the incoming freshmen at the Mount.
Many days spent catching up on dentist, doctors, etc.

I have been writing... new manuscript, which I was calling Incremental Losses, but which I am now calling Vexed Questions. I heard my colleague Sarah Scott use that term to refer to still unsolved questions regarding Shakespeare's "Julius Caesar."

According to the dictionary, it is a legal term which means "Point of law,often discussed or agitated,never determined or settled...difficult and troubling..."


The term fascinated me, and I've set up the manuscript in sections headed by some of my own vexed questions.

Actually, I have many vexed questions. More later.
Posted by Anne Higgins at 7:24 AM 1 comment:

Labels: and Glads flourishing in my garden..., Hostas, Lilies of the Valley, roses flourishing in the early June sea air at Cape May... Astilbe
Newer Posts Older Posts Home
Subscribe to: Posts (Atom)