How have three weeks gone by?  Actually, it seems longer than that.  The answer:  school has started, and my level of busy-ness has risen exponentially.  Also, my need for rest and downtime has risen.
I attribute this to the energy expended in teaching and also to the allergy medicine I've been taking.
We have a new prescription drug plan, and it won't pay for my old medicine, Singulaire.  I will need to jump through many annoying hoops to get this done, and instead I've resorted to taking Benadryl, which I had on hand.  It works on the hay fever symptoms, but it also makes me very tired. I am taking an untoward number of naps.  I look forward to the first frost.

This semester I am teaching three courses:  Christian Spirituality, Intro to Short Fiction, and
Veritas Symposium ( the replacement for Freshman Seminar).  I am enjoying all three, but the third is requiring much more planning , since it is a new course.  More on these in another entry. 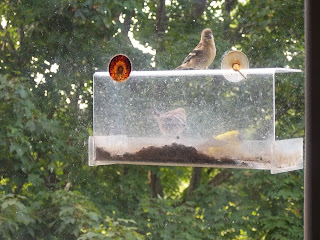 Posted by Anne Higgins at 5:31 AM 2 comments: Links to this post