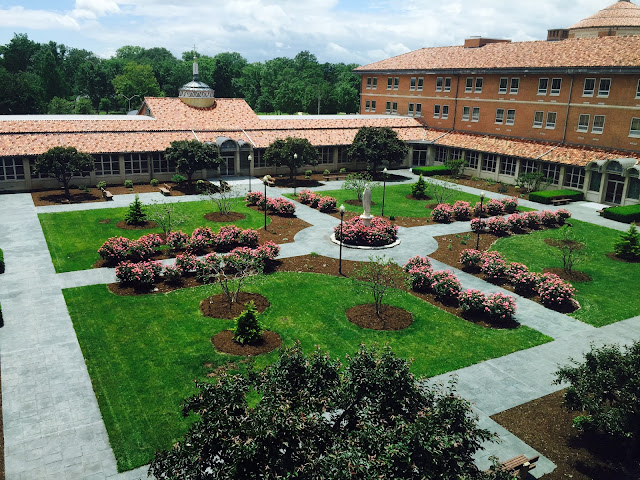 How is it that seven weeks of my summer holidays have gone by?  Well, I was out of town for two of them and sick for a third, but what of the other four?

In addition to naps and grocery shopping and listening to Ruth Rendell murder mysteries on tape,
I tended that courtyard garden, which is a source of joy for me every day.

And I worked on three summer projects.

1. Jessica Powers    I finished and presented the paper on Jessica before the summer actually began - at Fordham in late April.  Have talked about that in a previous post. 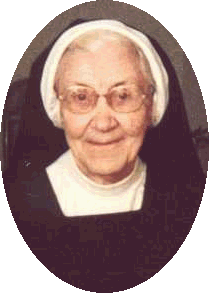 2. Stevie Smith      Finished my work on her poem and presented it at the West Chester Poetry Conference   June 8-11. 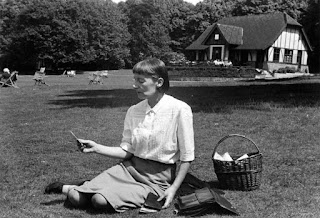 3. The Poetry Retreat      I finished this project today!  The poems are chosen and typed and all the materials duplicated.   I am giving this retreat to some of my sisters from July 10-18 in Albany New York. 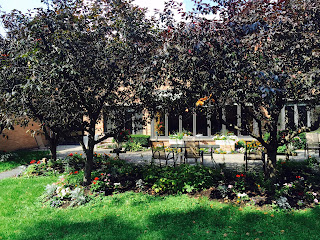 Now I have ten days to work/play in the garden, act as driver for any of my sisters who need rides to the doctor, etc.,  and , hopefully, break through this long dry spell, and write. 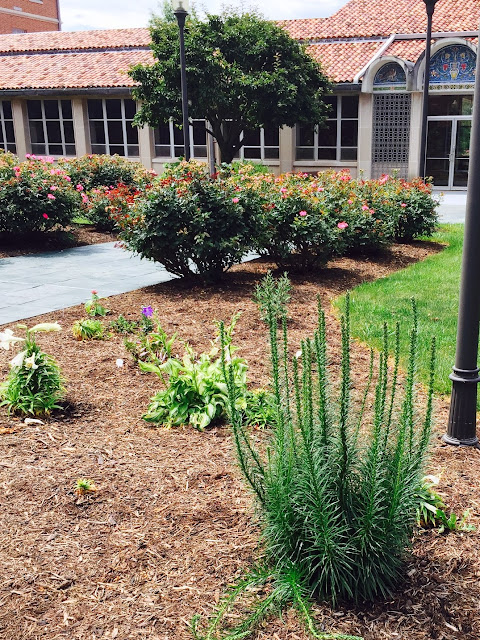 In the meantime, here is a poem I am using in this  "Praying with Poetry" retreat:


Dag Hammarskjöld
Translated from the Swedish by Lennart and Gillian Nilsson


Is this a new land,
in a different reality
from today’s?
Or have I lived there.
before this day?


Woke up,
an ordinary day with grey light
reflected from the street,
woke up –
from a sombre blue night
above the tree line
moonlight on the moor
the mountain ridge in shadow.
Remembered
different dreams,
remembered
the same mountain landscape:
twice did I climb the ridges,
I lived by the inmost lake
and followed the river
towards its source.
The seasons have passed
and the light
and the weather
and the hour.
But it is the same land.
And I am beginning to know the map
and the points of the compass.

Posted by Anne Higgins at 5:55 PM No comments: Links to this post 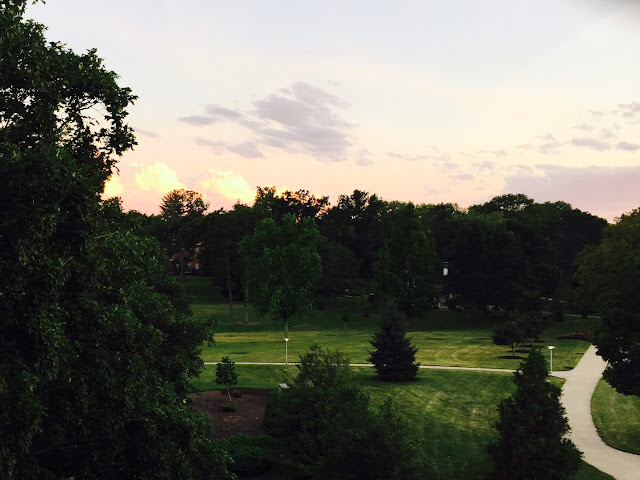 Longest day of the year comes to a close at 8:45PM.

Can't say more right now, for I'm recovering from another bout of small bowel disease - enough said.
Posted by Anne Higgins at 5:48 PM No comments: Links to this post 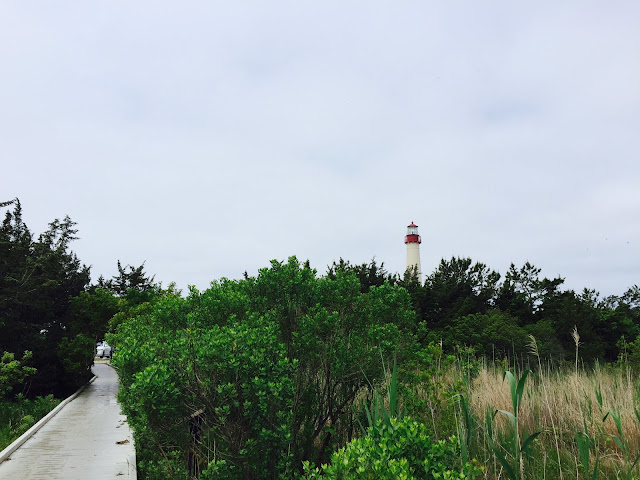 I'm here by myself this year. Although the two weeks allotted to us to have this house start a week later than last year, the other sisters can't come until next week.  And the numbers are dwindling; more and more of them can't  do the steps.

Only child that I am, I have never minded a few days alone.  I am immersed in several disparate things:   preparing my panel talk on Stevie Smith's poem "Pretty,"  binge-watching the Netflix video "The Keepers,"  walking all over town, sleeping, and , of course, birding.

Yesterday I saw a female Canada Warbler foraging in the hedges at the State Park's Nature Trail.
I couldn't even begin to photograph her, but here is a photo by someone else: 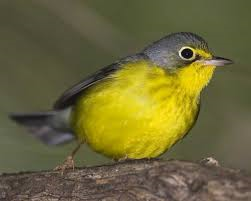 I'm not sure if I've ever seen one in real life before. If I have, it has not been for a very long time.


The rain and fog have finally left, and here is the view yesterday: 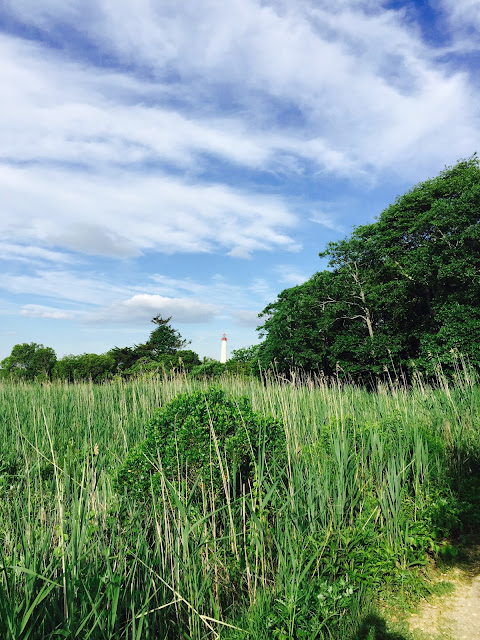 I took the photo below of the bare tree that I call my "Merlin Tree"  Last October while I was just standing still on the trail below, a Merlin flew in, landed on one of those bare branches, and lingered.
It felt like a visitation. 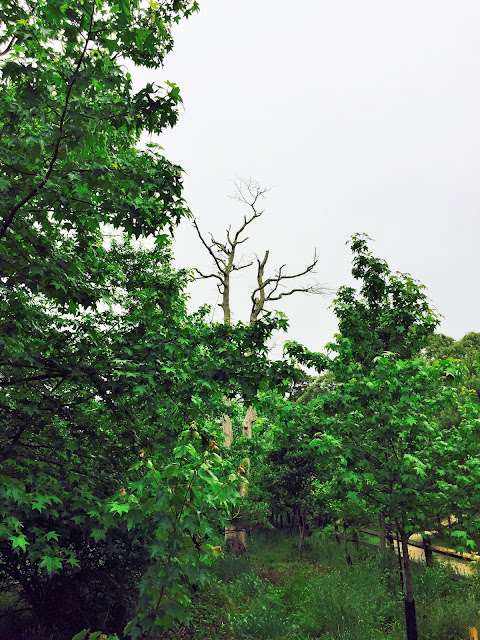 Stevie Smith's poems have also reminded me of a modernist Emily Dickinson, which then reminded me of one of Dickinson's poem that I set to music back when I was a sophomore in college. I can still hear it in my mind:
I DIED for beauty, but was scarce
Adjusted in the tomb,
When one who died for truth was lain
In an adjoining room.
He questioned softly why I failed?         5
“For beauty,” I replied.
“And I for truth,—the two are one;
We brethren are,” he said.
And so, as kinsmen met a night,
We talked between the rooms,         10
Until the moss had reached our lips,
And covered up our names.
Posted by Anne Higgins at 12:03 PM No comments: Links to this post