Another long space of silence here.  No excuses.

Last Saturday morning, I was in my garden doing a little weeding, and then tying up a few of the branches of the butterfly bushes; three of them all growing together.  Behind them is an enormous Pokeweed plant - easily seven feet tall - which I welcomed, since the birds love its deep purple berries in the autumn. In fact, they are already showing.

Anyway... something flew right by me, almost into me , and into the nearest butterfly bush. It was a fledgling Catbird.  I was so glad to see him/her; haven't had the Catbird visiting my window lately, and thought the family was gone. It seems they prefer the fruit of that Pokeweed, because the young one was squawking for the parent, who showed up very shortly. 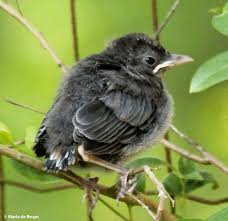 Then, the very next day, I was working in my bedroom and suddenly heard a loud crash into my bedroom window.  Definitely a bird strike.  I went down three flights of steps, out to my garden, and was dismayed to see black and white striped wings spread out and flattened on the ground.  A fledgling Red-bellied Woodpecker.  But not dead!  I touched him/her and he was warm, and moved under my hand.  I folded the wings into the body, and picked him up.  Heart was beating strong and steady, bird feet curled around my finger, and eyes open and blinking together.  Hopefully, this guy was just stunned.  I savored the minutes I held him- what a privilege- spoke quietly to him and wished him well, and placed him a little further along on a clear space in the garden. He sat up - another good sign.  Sure enough, when I checked an hour later, he was gone. 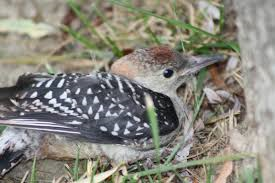 also not my photo, but he looked just like this.

Posted by Anne Higgins at 5:24 PM No comments: