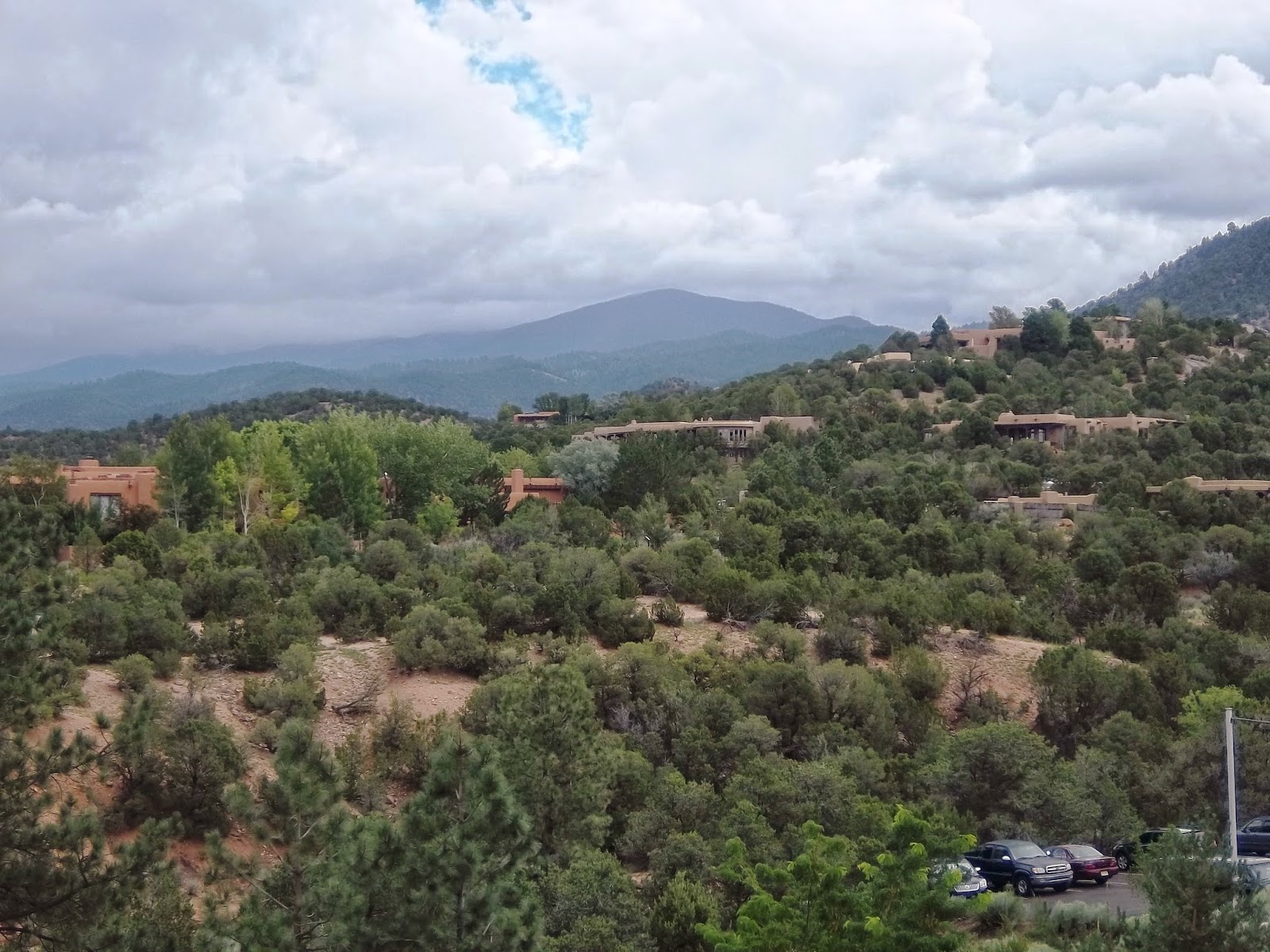 The view this morning from the terrace on the second floor of the Peterson Student Center ; it's more dramatic in the early evening when the sun is shining on that mountain and valley.

We began our workshops today.  Here are a few things I noted down from Scott Cairns' observations:
What makes a poem a poem?
... the poetic operation of language
... the opacity of words ... mirroring and mystery...
your own image is implicated in that.

...word-conscious opacity... musicality  ( I almost wrote muscatelity!)
... the shape a word makes in your mouth...
entering into a conversation that's been going on for centuries...

If you read a poem once and you're done with it, it's not a poem.

The English language: the ghosts of so many other languages in this museum...

A word is a thing and it DOES things...

...words that trouble...
The clarity yields its enormity...

Through much of the three hours of discussion and workshop, I realize I have left my poems, so many of them, too soon.

He read us Wallace Stevens' masterpiece  "The Idea of Order at Key West" ---a poem that he returns to again and again, year after year:

The Idea of Order at Key West

She sang beyond the genius of the sea.
The water never formed to mind or voice,
Like a body wholly body, fluttering
Its empty sleeves; and yet its mimic motion
Made constant cry, caused constantly a cry,
That was not ours although we understood,
Inhuman, of the veritable ocean.


The sea was not a mask. No more was she.
The song and water were not medleyed sound
Even if what she sang was what she heard,
Since what she sang was uttered word by word.
It may be that in all her phrases stirred
The grinding water and the gasping wind;
But it was she and not the sea we heard.


For she was the maker of the song she sang.
The ever-hooded, tragic-gestured sea
Was merely a place by which she walked to sing.
Whose spirit is this? we said, because we knew
It was the spirit that we sought and knew
That we should ask this often as she sang.


If it was only the dark voice of the sea
That rose, or even colored by many waves;
If it was only the outer voice of sky
And cloud, of the sunken coral water-walled,
However clear, it would have been deep air,
The heaving speech of air, a summer sound
Repeated in a summer without end
And sound alone. But it was more than that,
More even than her voice, and ours, among
The meaningless plungings of water and the wind,
Theatrical distances, bronze shadows heaped
On high horizons, mountainous atmospheres
Of sky and sea.
It was her voice that made
The sky acutest at its vanishing.
She measured to the hour its solitude.
She was the single artificer of the world
In which she sang. And when she sang, the sea,
Whatever self it had, became the self
That was her song, for she was the maker. Then we,
As we beheld her striding there alone,
Knew that there never was a world for her
Except the one she sang and, singing, made.


Ramon Fernandez, tell me, if you know,
Why, when the singing ended and we turned
Toward the town, tell why the glassy lights,
The lights in the fishing boats at anchor there,
As the night descended, tilting in the air,
Mastered the night and portioned out the sea,
Fixing emblazoned zones and fiery poles,
Arranging, deepening, enchanting night.


Oh! Blessed rage for order, pale Ramon,
The maker’s rage to order words of the sea,
Words of the fragrant portals, dimly-starred,
And of ourselves and of our origins,
In ghostlier demarcations, keener sounds. 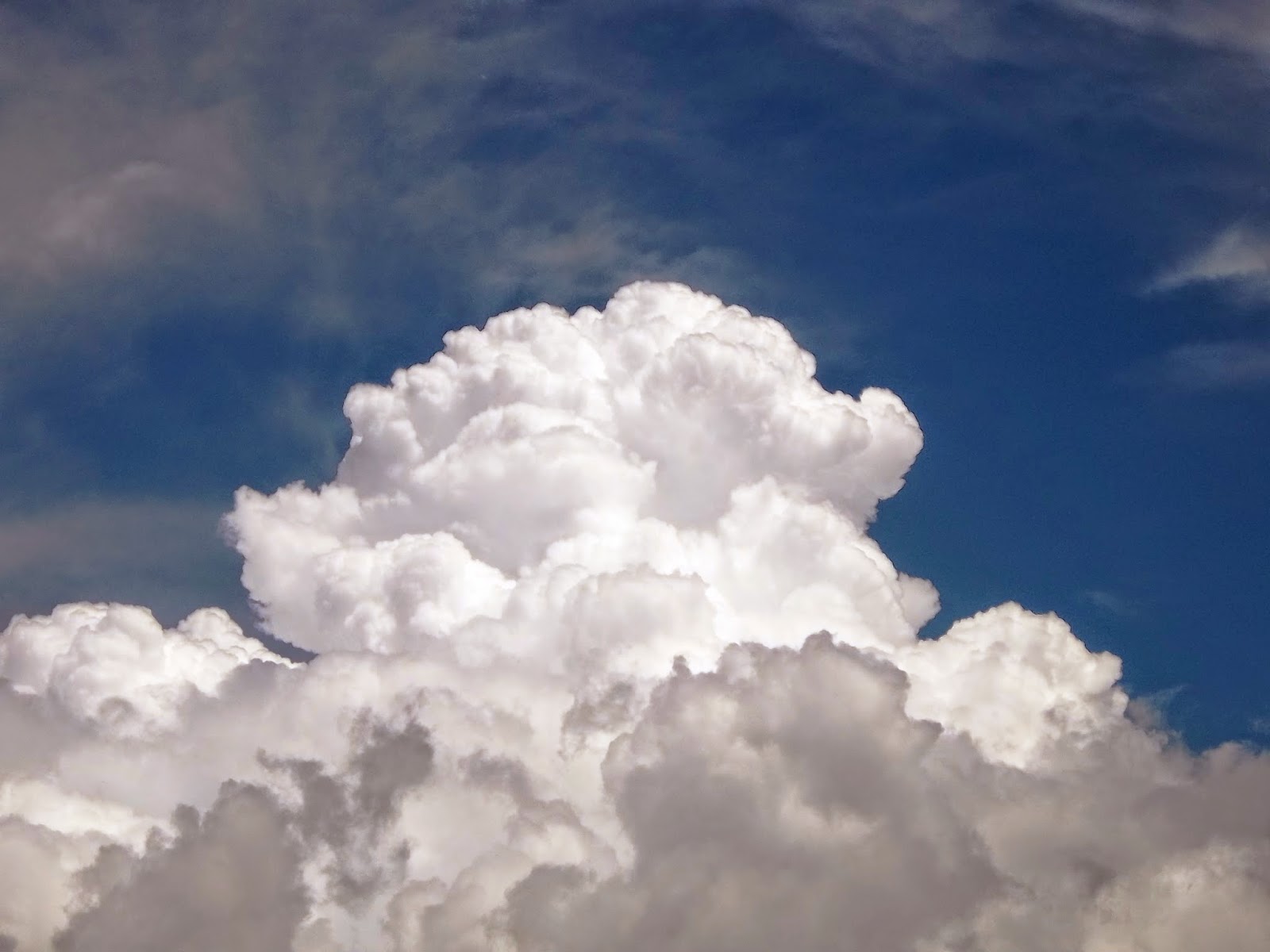 A cloud in the sky above our building here this morning.

This afternoon, it's chilly and raining.  I'm hoping for a clearing, though they do need the rain.