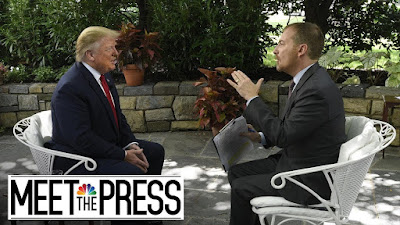 On Sunday mornings, I try to watch Meet the Press. This past Sunday, Chuck Todd interviewed Donald Trump.  The interview was predictably filled with Trump's fast -talking and glib lies.

What interested me were the comments by the men and women on the round table review of the interview, especially these:

( from the transcript of the show)

Yeah, Nixon China. He is in the position. And, and everyone knows the terms of the deal. Everyone understands what the Democrats want of it, want out of it. Everyone understands what the Republicans would like to see in terms of border security and a merit-based system. He's the one that can get this done. And I, I imagine it's frustrating. This politics involved. I get that. It's an election year. It's especially difficult to do immigration in an election year. But I still think the president's the one with the opportunity to do it and to go out there and actually get this deal done.

Yeah, that's a great question, right? In the last two weeks, basically, he's done this three times. He did the Mexico and the tariffs. He says, "I'm going to impose these crippling tariffs, unless you give me what I want." And then he pulled off, saying he got a deal. He did the same thing with Iran, not saying he got a deal, but he pulled back on the strike. And he's just done, this weekend, on these ICE deportations. "Well, Nancy Pelosi called me. So I decided to hold off for two weeks."

By the way, he wants to give Democrats the credit for that, which I find--

--a bit of a head scratcher. On one hand, I get it with the base. But I don't know if that's smart with swing voters. But okay.

Yeah, it’s, it’s-- You know, he's being accommodating. He's saying, "Look, I'm going to be the reasonable guy here," even though it was a crisis he himself set up. This weekend is going to be the weekend of mass deportations. Well, maybe it's not. He likes to create a crisis and then be the solver of this crisis. It is part of the showman aspect, I think, of his presidency, to some extent. I think he looks at it as a way of getting to where he wants to go. You put out a maximalist, almost extreme version of what you want to get in order to push your other side to get 70%, 80% of where you want. Sometimes, that works. But I think a lot of the time, right now, he's just sort of, you know, coming up with a deal that's not much of a deal.

Chuck, in watching your exchange with him about these kids at the border, it made me think of that phrase that he uttered over and over again. "I alone can fix it." And I think he's deeply frustrated that he can't fix this problem. So he did walk right up to the line of these deportations that were supposed to start today and then say, "Look. Now, I'm calling on Democrats and Republicans to get something done on asylum." That's not going to happen. Talk to anyone. That's not going to happen. What could happen? They are considering these bills that would add more funding to DHS, to HHS, at the border. And he'll claim credit and say, "Look. We got this done, ultimately."

I want to talk about what he said about Hillary Clinton and Joe Biden. One of your neighbors on the Wall Street Journal editorial page, Daniel Henninger, had an interesting observation about Joe Biden and the Sleepy Joe reference. And he says, it's "Trump's 'Sleepy Joe' Problem. Mr. Biden may be doing so well in the head-to-heads against Mr. Trump because many voters simply want respite from the nonstop Trumpian atmosphere of disruption and volatility. For them, 'Sleepy Joe Biden' may not be an insult. Political belief still matters, but maybe not as much as neurological relief from political and personality overload."

I thought that was a-- and in some ways, that interview and this column, you see how that could go together.

Oh, sure. Do you remember, on The Ed Sullivan Show, when we were little children, there was a guy who came and balanced plates? There'd be a stick. He'd put a plate up. He'd get it going.

He'd get another, get another. And then he'd run back and forth, just trying to keep them all up. Balancing plates is part of the tone of this administration and of this president. Look, it's nonstop harum-scarum. Even something that, in the past, might've been as cleanly, logically handled as the Iran thing became nonstop harum-scarum. "It has this meaning. No, it has this meaning. I did it for this reason." He is exhausting. I think a threat for the president is that he tends to exhaust, not into submission, but into ultimate aversion. Many people in the middle, who'd like to, you know, be sympathetic towards him but just think, "Oh, my goodness. This is too much.
"
CHUCK TODD:

Stop all the drama.

But, but that's, that’s how the president gets things done. I mean, that's his style. This is who he is. I mean, it's this notion that you're going to change who he is. I think we should just give up on that, right? All the criticism about there being no process in this White House--

There won’t be one.

Do you really expect there to be process in this White House? I mean, and the president arrives at decisions the way he's going to arrive at decisions. I just, I don't understand all these Democratic candidates out there criticizing on process. And I get it. I love good process more than anyone else. But why do that? That is not a compelling argument. He's going to do what he's going to do.

But it's not process. Nonstop harum-scarum is sort of an approach that can exhaust people.

And I think he's struggling with how to take on Biden. I mean, you saw that, when he was in Florida, launching his campaign. So he went back to his talking points on Hillary Clinton. Because in some ways, he's more comfortable there.

He's decided she was a great candidate now.

By the way, there was a reason he needs--

Yeah, because she's a great candidate, because it would make his victory seem more--

That much more impressive.