Theater of the Absurd, or Donald Trump's Republicans?

If they're riding on his coattails, they are swinging wildly! 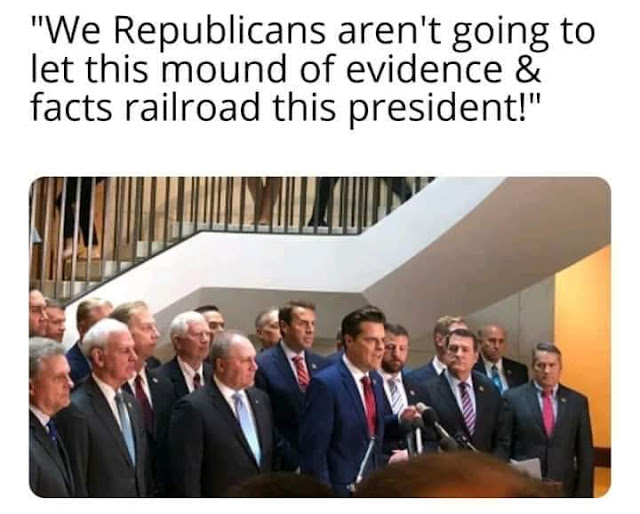 The chairman of the House Homeland Security Committee on Wednesday asked the top congressional law enforcement official to "take action" in response to GOP lawmakers bringing electronic devices to a secure facility while disrupting the deposition of a witness in the impeachment inquiry.
In a letter to Sergeant-at-Arms Paul Irving, House Homeland Security Committee Chairman Bennie Thompson (D-Miss.) said that Republicans’ decision to bring cell-phones into the room, known as a sensitive compartmented information facility (SCIF), violated security protocols established by the intelligence community to protect classified information.
"This unprecedented breach of security raises serious concerns for committee chairman, including me, responsible for maintaining SCIFs," Thompson wrote.
Thompson asked Irving to make unspecified moves to make the security protocol clear to all House members.
"As such, I am requesting you take action with respect to the members involved in the breach. More broadly, I urge you to take House-wide action to remind all members about the dangers of such reckless action and the potential national security risks of such behavior," Thompson wrote.
Lawmakers typically use the SCIF to discuss sensitive information in a facility that is designed to be protected from foreign surveillance.
Impeachment inquiry witness depositions have been taking place in the SCIF, which is located two levels below the basement in the Capitol Visitor Center.
At least 30 House Republicans entered the SCIF on Wednesday morning to demand access to the witness depositions, which are currently restricted to members of the House Intelligence, Foreign Affairs, and Oversight and Reform committees leading the impeachment inquiry.
The deposition of Laura Cooper, the deputy assistant secretary of Defense for Russia, Ukraine and Eurasia, eventually began later Wednesday after a five-hour delay.
Rep. Mark Meadows (R-N.C.), a member of the House Oversight and Reform Committee, said that he collected lawmakers' phones and brought them outside the room in adherence with protocol.
"You certainly want a secure environment, but at the same time I think everybody wants to hear exactly what's going on," Meadows told reporters.
A number of House Republicans who entered the SCIF sent tweets from their official accounts while still in the facility, though some later clarified that the tweets were sent by staff.
Rep. Alex Mooney (R-W.Va.) shared audio of a phone call "live from the SCIF," but he clarified that he was making a call from a secure line inside the facility because lawmakers had to hand over their cellphones.